After marrying a successful Parisian writer known commonly as “Willy” (Dominic West), Sidonie-Gabrielle Colette (Keira Knightley) is transplanted from her childhood home in rural France to the intellectual and artistic splendour of Paris. Soon after, Willy convinces Colette to ghostwrite for him. She pens a semi-autobiographical novel about a witty and brazen country girl named Claudine, sparking a bestseller and a cultural sensation.

After its success, Colette and Willy become the talk of Paris and their adventures inspire additional Claudine novels. Colette's fight over creative ownership defies gender roles and drives her to overcome societal constraints, revolutionising literature, fashion and sexual expression. 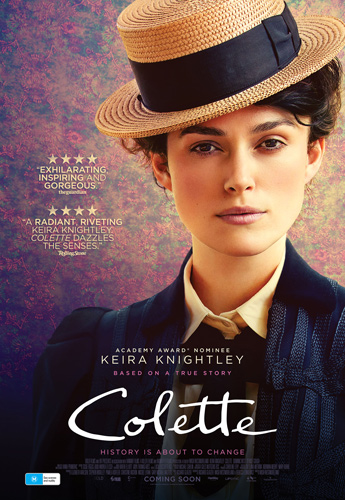 To celebrate the release of 'Colette' in cinemas, we're giving you the chance to win a double pass.

Due to the film's release schedule and redeemability of passes, this competition is only open to residents of the Australian Capital Territory, Northern Territory, New South Wales, Queensland, South Australia, Victoria and Western Australia.

Like our page on Facebook, follow us on Twitter or Instagram, or become a member on SWITCH.
Complete your details below. Members can sign insign in at the top of this page to have their details automatically filled in.
Please ensure the fields marked in red are completed.
Become a member - so I don't have to fill in my details every time
Competition opens at 5:00pm AEDT on Wednesday 12th December 2018 and closes at 11:59 pm AEDT on Wednesday 19th December 2018. Five winners will be chosen at random on Thursday 20th December 2018. To successfully win, entrants must fulfil the above entry conditions before the time the competition closes. Current members/followers are eligible to enter the competition. Only one entry per person. Only one winner per household. To be a valid winner, the entrant must not have won a prize from SWITCH within the last 28 days. Each winner will receive one double pass to 'Colette'. By entering, you agree to receive occasional emails from SWITCH in the future. If you decide to unsubscribe from these updates, any further entries will not be applicable. Only Australian residents are eligible to enter.
FAST FACTS
RELEASE DATE: 20/12/2018
RUN TIME: 01h 51m
SCORE: Thomas Adès
www.colette.movie
ColetteMovie
ColetteMovie