TAKE A BITE OUT OF THIS SLIPPERY SERIES!

Anaconda - Dr Steven Cale (Eric Stoltz) and Terri Flores (Jennifer Lopez) are filming a documentary in the Amazon jungle when they rescue the enigmatic Paul Serone (Jon Voight). Serone has his own agenda, however, as his quest to capture a deadly 40-foot anaconda places the lives of everyone on the team in peril.

Anacondas: The Hunt for the Blood Orchid - A scientific team encounters a massive slithering terror during an expedition into the jungle in this tongue-in-cheek sequel to "Anaconda."

Anaconda 3: Offspring - A ruthless mercenary, Hammett (David Hasselhoff) and his team are on the hunt for a pair of giant snakes that have escaped and are on a mega-sized feeding frenzy.

Anaconda 4: Trail of Blood - Even though the two monster snakes are dead, a trail of victim's blood confirms that a new generation of snakes have reached adulthood and are preying upon everything.

Lake Placid vs Anaconda - Get ready for a non-stop bloodbath unlike anything you’ve seen before in this heart- pounding battle between mutated crocodiles and genetically engineered anacondas. 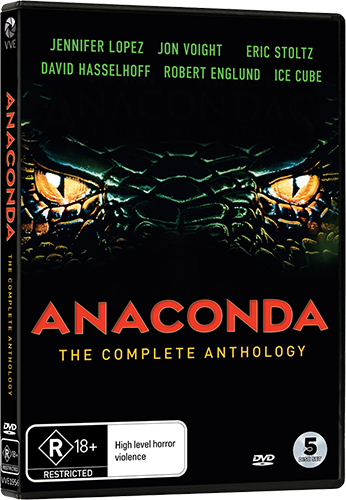 The 'Anaconda: The Complete Anthology' competition has now closed. Winners will be announced shortly. Check our Comps page for all a list of our winners.

Competition opens at 5pm AEDT on Sunday 29th December 2019 and closes at 11:59pm AEDT on Sunday 5th January 2020. Three winners will be chosen at random on Monday 6th January 2020. To successfully win, entrants must fulfil the above entry conditions before the time the competition closes. Current members/followers are eligible to enter the competition. Only one entry per person. Only one winner per household. To be a valid winner, the entrant must not have won a prize from SWITCH within the last 28 days. Each winner will receive one DVD copy of 'Anaconda: The Complete Anthology'. By entering, you agree to receive occasional emails from SWITCH in the future. If you decide to unsubscribe from these updates, any further entries will not be applicable. Only Australian residents are eligible to enter.

'Anaconda: The Complete Anthology' is available on DVD on Wednesday the 1st January 2020 from Via Vision Entertainment.