AN EPIC PORTRAYAL OF A TRAGEDY

An epic portrayal of the events surrounding the infamous 1819 Peterloo Massacre, where a peaceful pro-democracy rally at St Peter’s Field in Manchester turned into one of the bloodiest and most notorious episodes in British history.

The massacre saw British government forces charge into a crowd of over 60,000 that had gathered to demand political reform and protest against rising levels of poverty. Many protestors were killed and hundreds more injured, sparking a nationwide outcry but also further government suppression.

The Peterloo Massacre was a defining moment in British democracy which also played a significant role in the founding of The Guardian newspaper. 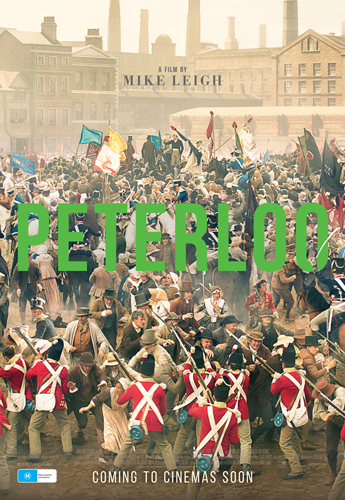 To celebrate the release of 'Peterloo' in cinemas, we're giving you the chance to win a double pass.

Due to the film's release schedule and redeemability of passes, this competition is only open to residents of the Australian Capital Territory, New South Wales, Queensland, South Australia, Tasmania, Victoria and Western Australia.

Like our page on Facebook, follow us on Twitter or Instagram, or become a member on SWITCH.
Complete your details below. Members can sign insign in at the top of this page to have their details automatically filled in.
Please ensure the fields marked in red are completed.
Become a member - so I don't have to fill in my details every time
Competition opens at 5:00pm AEST on Sunday 5th May 2019 and closes at 11:59 pm AEST on Sunday 12th May 2019. Five winners will be chosen at random on Monday 13th May 2019. To successfully win, entrants must fulfil the above entry conditions before the time the competition closes. Current members/followers are eligible to enter the competition. Only one entry per person. Only one winner per household. To be a valid winner, the entrant must not have won a prize from SWITCH within the last 28 days. Each winner will receive one double pass to 'Peterloo'. By entering, you agree to receive occasional emails from SWITCH in the future. If you decide to unsubscribe from these updates, any further entries will not be applicable. Only Australian residents are eligible to enter.
FAST FACTS
RELEASE DATE: 16/05/2019
RUN TIME: 02h 24m