GETTING THE GANG BACK TOGETHER FOR A NEW ADVENTURE

Disney and Pixar’s 'Toy Story 4' took audiences on a hilarious and heartwarming road trip with Woody, Buzz Lightyear and the whole gang, earning a 98 per cent critics rating on Rotten Tomatoes and more than $1 billion at the global box office. Packed with old friends and new faces, the fourth film in the beloved Toy Story series, which leads Woody to an unexpected fork in the road.

Fans who bring home 'Toy Story 4' will be treated to over an hour of bonus features celebrating the film’s iconic characters, Pixar’s filmmaking team and the legacy of “Toy Story,” which began as the world’s first fully computer-animated feature film released nearly 25 years ago. Extensive extras includes deleted scenes such as an alternate ending, an all-new featurette with an endearing look back on Woody and Buzz’s legendary friendship throughout the years; entertaining studio stories shared by members of the Pixar team; a nostalgic look back at the creation and first storyboard screening of 'Toy Story' with filmmakers; and the pioneering efforts of Pixar artists who created the sets, characters, look and feel of the original film and much more.

Click here to read our theatrical review of ‘Toy Story 4’. 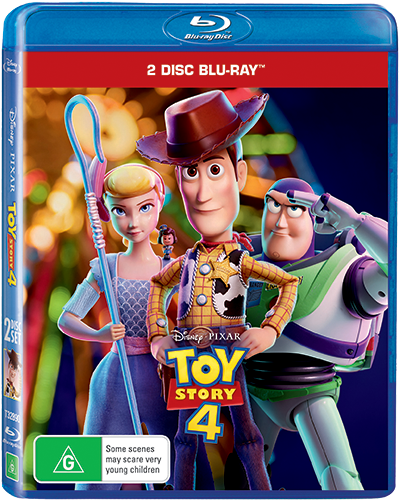 The 'Toy Story 4' competition has now closed. Winners will be announced shortly. Check our Comps page for all a list of our winners.

Competition opens at 5pm AEDT on Sunday 6th October 2019 and closes at 11:59pm AEDT on Sunday 13th October 2019. Five winners will be chosen at random on Monday 14th October 2019. To successfully win, entrants must fulfil the above entry conditions before the time the competition closes. Current members/followers are eligible to enter the competition. Only one entry per person. Only one winner per household. To be a valid winner, the entrant must not have won a prize from SWITCH within the last 28 days. Each winner will receive one Blu-ray copy of 'Toy Story 4'. By entering, you agree to receive occasional emails from SWITCH in the future. If you decide to unsubscribe from these updates, any further entries will not be applicable. Only Australian residents are eligible to enter.