The evolution story of Marvel’s most enigmatic, complex and badass character - Venom! Eddie Brock (Tom Hardy) is a broken man after he loses everything including his job and fiancée. Just when his life is at its lowest, he becomes host to an alien symbiote which results in extraordinary superpowers – transforming him into Venom.

Will these powers be enough for this new lethal protector to defeat great evil forces, especially against the far stronger and more weaponised symbiote rival, Riot?

Click here to read our theatrical review of ‘Venom’. 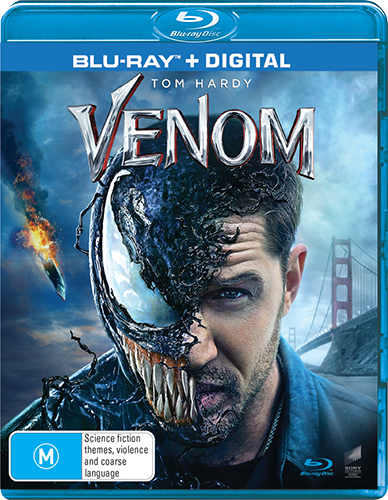 The 'Venom' competition has now closed. Winners will be announced shortly. Check our Comps page for all a list of our winners.

Competition opens at 5pm AEDT on Sunday 13th January 2019 and closes at 11:59pm AEDT on Sunday 20th January 2019. Five winners will be chosen at random on Monday 21st January 2019. To successfully win, entrants must fulfil the above entry conditions before the time the competition closes. Current members/followers are eligible to enter the competition. Only one entry per person. Only one winner per household. To be a valid winner, the entrant must not have won a prize from SWITCH within the last 28 days. Each winner will receive one Blu-ray copy of 'Venom'. By entering, you agree to receive occasional emails from SWITCH in the future. If you decide to unsubscribe from these updates, any further entries will not be applicable. Only Australian residents are eligible to enter.

'Venom' is available on 4K Ultra HD, Blu-ray, Digital and DVD on Wednesday the 16th January 2019 from Universal Sony.