JUMANJI: THE NEXT LEVEL

'Jumanji: The Next Level' is exactly what you'd expect it to be - which isn't necessarily a bad thing. Sometimes you need an adventure movie that you can take your nan too or sit the family down to watch. Having said that, it is unpredictable in its diverse performances and the constant character changes. Seeing Kevin Hart playing an 80-year-old-man opposite Jack Black as a 20-year-old girl offers some good quality giggles. There's even characters playing horses!

'The Next Level' focuses on the original team getting sucked back into the game after realising Spencer is missing. Surprisingly, the game sucks in everyone in from the house - including Spencer's grandfather Eddie (Danny DeVito) and Milo (Danny Glover). The film plays with the humour of two elderly patrons being pulled into the game and placed in the bodies of physically fit, young people.

Much in the theme of the last one, the team must complete a quest without losing all their lives in order to return home. It still does well playing with the nuances of game theory and interweaving video game components, although it could have improved slightly with the game's story.

This movie plays to its purpose, which is to entertain and have fun. Danny Glover and Danny DeVito give the sequel a fresh storyline without straying from the film's original framework. What was a little disappointing was the laziness of the writing. At times, the story lost momentum and the narrative was put on hold for unnecessary jokes, and the jokes that did exist were often a little repetitive.

The film is punchy, landing some great jokes that will make you laugh out loud, with an entertaining, slightly predictable story.

What was fun in the first 'Jumanji' was the suspense that was created by unpredictable and motivated deaths. 'Jumanji: The Next Level' has too many irrelevant deaths and game clues that were far too loosely tied in, the downfall of this being there was never really any skin in the game; we weren't left feeling as though any characters were at stake.

The film is punchy, landing some great jokes that will make you laugh out loud, with an entertaining, slightly predictable story. It wasn't as good as the first 'Jumanji', but it is a great quality sequel and is full of family fun! 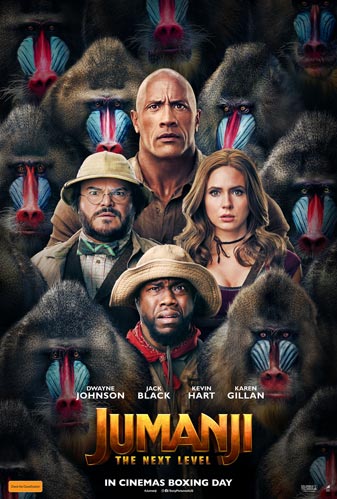 To celebrate the release of 'Jumanji: The Next Level' in cinemas, we're giving you the chance to win a family pass.

To win one of five family passes, just make sure you follow both steps:

Like our page on Facebook, follow us on Twitter or Instagram, or become a member on SWITCH.
Complete your details below. Members can sign insign in at the top of this page to have their details automatically filled in.
Please ensure the fields marked in red are completed.
Become a member - so I don't have to fill in my details every time
'Jumanji: The Next Level' is in cinemas from Thursday the 26th December 2019 through Sony.

MOANA
Yet another Disney classic in the making
She’s the anti-princess Disney Princess, and shows the company is determined to evolve what that iconic character type means in this new century.

CENTRAL INTELLIGENCE
A solid start for this dynamic duo
Similar films tend to be all sizzle and no bang, with all of the funniest moments crammed into the trailer. Fortunately, that is not the case here.

WONDER PARK
The park is closed indefinitely
It so badly wants to be the next thing, but ‘Wonder Park’s' construction crumbles before it’s even begun being built. Take the kids to an actual theme park instead.

TOMB RAIDER
Lacking action in favour of an extended origin story
This reboot could have been so much more, with a script and characterisations abysmal enough to make your eyes bleed. It needed a stronger team to bring this feisty female’s story to the big screen.
FAST FACTS
RELEASE DATE: 26/12/2019
RUN TIME: 02h 03m
JumanjiMovie
JumanjiMovie
JumanjiMovie

RELATEDMOANAYet another Disney classic in the making

RELATEDJUMANJI: WELCOME TO THE JUNGLEJack Black is the reason to see this movie

RELATEDTOMB RAIDERLacking action in favour of an extended origin story