LIFESTYLES OF THE YOUNG AND RESTLESS

The cult of celebrity has never been more extreme. We live in a time where someone can become famous for doing nothing whatsoever, where teenagers look at socialites and heiresses as role models, where what you wear on your feet and carry your purse in are important, life-defining decisions. In 2008 and 2009, seven Californian teenagers took their worship and desires to the extreme, walking into the houses of the rich and famous and taking whatever they wanted. It was this case that Oscar-winner Sofia Coppola chose for her latest film, ‘The Bling Ring’.

Mark (Isreal Broussard) finds solace in his new school from Rebecca (Katie Chang), a beautiful girl who takes the loner under her wing. Very soon, she introduces Mark to her unusual hobby of walking into unlocked mansions and taking whatever she’d like, and together, they take their activities one step further by trespassing on the homes of the rich and famous. The gang begins to build when sisters Nicki (Emma Watson) and Sam (Taissa Farmiga) and reckless Chloe (Claire Julien) join in with robberies at the homes of Paris Hilton, Megan Fox and Orlando Bloom. Together, they begin to disappear into indulgence and social disregard, until their overwhelming self-confidence brings about their downfall.

I will admit, off the bat, to not being a particularly big fan of Sofia Coppola’s previous films. As a filmmaker, she’s clearly technically accomplished, but her grasp of rhythm and narrative have proven to be sketchy at best, and often the intentions of her films are wildly unclear, making them come across as slightly vapid. For all these reasons, though, ‘The Bling Ring’ seems to be a perfect match for her skills, resulting in one her most accessible and entertaining films. Lensed by the late Harry Savides, the film has a glorious washed-out, almost clinical look, and the detached observational nature of the camera that Coppola and Savides had employed previously is at its best here, capturing events without judgement or influencing the audience.

The film moves at a very deliberate pace, but running less than an hour and a half, it never outstays its welcome. Coppola still displays a problem with tension and building towards any kind of climax, but rather than a film about people simply "being" (which often had come across as tedious), the characters of ‘The Bling Ring’ are caricatures of people, albeit caricatures that people have created of themselves. The excellent cast, headlined by a terrific Emma Watson, improvise and play their way through the wonderlands of these Californian mansions, lending the film an almost documentary feel. Coppola also intercuts the film with flash-forwards to the trial and post-arrest interviews of the characters, cleverly reminding us that this game is going to always come to an end.

There’s no doubt ‘The Bling Ring’ is a satire; a peek into a bizarre facet of celebrity worship we know exists and probably fall into, but never want to admit or talk about. It’s like a TMZ episode created by a visual artist, and never does Coppola allow us to think we truly know or understand these teenagers or why they do what they do. Compared to Harmony Korine’s ‘Spring Breakers’, which covers the same sort of thematic ground, ‘The Bling Ring’ seems a little too clean and clinical, but that doesn’t make it any less entertaining, and is a reminder that, not only does Sofia Coppola know her way around a camera, she also has sense of humour about her.

The excellent cast, headlined by a terrific Emma Watson, improvise and play their way through the wonderlands of these Californian mansions.

PICTURE & SOUND
Slick, clean showy, the 1080p 1.85:1 picture on this Blu-ray release of ‘The Bling Ring’ looks as terrific as you would expect. Colour-graded and saturated to create that washed-out Californian look, the transfer gleams with razor-sharp digital clarity. There’s nothing cinematic about the quality of this image, which feels incredibly appropriate for a film of this nature and subject matter. The same can be said for the thumping DTS-HD MA 5.1 track. Say what you will about her films, but Coppola knows how to use music better than most directors, and the highlight of the sound design of the film is its thumping soundtrack of high-end Versace pop, carefully chosen and utilised for maximum effect. This isn’t the kind of disc that you’d use to show off your system to your mates, but it’s another example of how the format can perfectly capture the artistic intent of a talented filmmaker.

SPECIAL FEATURES
We might not have all the features from the U.S. release, but what we do have in the excellent making-of featurette is nothing to scoff at. Free of fluff and packed with insightful interviews, it covers Coppola’s inspiration for the film, the casting process and how best to recreate the homes of the rich and famous, which included filming in Paris Hilton’s actual home. This is certainly a case of behind-the-scenes footage enhancing the experience of a film. The only curio that would have been fun to have from the U.S. release would have been the interview with Hilton about the robberies, which would surely have been great entertainment value. 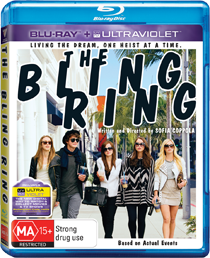 Like our page on Facebook, follow us on Twitter or Instagram, or become a member on SWITCH.
Complete your details below. Members can sign insign in at the top of this page to have their details automatically filled in.
Please ensure the fields marked in red are completed.
Become a member - so I don't have to fill in my details every time
Competition opens at 5:00pm AEDT on Sunday 6th October 2013 and closes at 11:59 pm AEDT on Sunday 13th October 2013. Five winners will be chosen at random on Monday 14th October 2013. To successfully win, entrants must fulfil the above entry conditions before the time the competition closes. Current members/followers are eligible to enter the competition. Only one entry per person. Only one winner per household. To be a valid winner, the entrant must not have won a prize from SWITCH within the last 28 days. Each winner will receive one . By entering, you agree to receive occasional emails from SWITCH in the future. If you decide to unsubscribe from these updates, any further entries will not be applicable. Only Australian residents are eligible to enter.
FAST FACTS
RELEASE DATE: 09/10/2013
RUN TIME: 01h 30m
www.theblingringmovie.com.au
BlingRingMovie
BlingRingMovie