AN ENTERTAINING SCI-FI STUCK BETWEEN THE PAST AND THE FUTURE

It’s been a long journey to the screen for James Cameron’s adaptation of ‘Alita: Battle Angel’. After being introduced to the original manga and anime in the late 90s, Cameron began a long development and writing process before putting the project on hold to wait for technology to catch up with his vision. Last year, now under director Robert Rodriguez (‘Machete, ‘Sin City’), his screenplay with Laeta Kalogridis finally made it to the screen. The film did modest business, but never seemed to catch on with audiences. It’s a pity because, despite its many flaws, there’s something weirdly charming about it.

Based on the manga by Yukito Kishiro, the film follows Alita (Rosa Salazar, ‘The Kindergarten Teacher’), a young female cyborg rescued and repaired by the fatherly Dr Dyson Ido (Christoph Waltz, ‘Inglorious Basterds’) in the futuristic Iron City in 2563. Apart from a few flashes, she has little memory of her past, but after demonstrating incredible self-defence skills, she begins a journey to find out who she really is.

‘Alita’ is one of those weird films that feels both ahead and behind the times. Cameron was not convinced until his work on ‘Avatar’ that the technology existed to adapt Kishiro’s manga faithfully, but the visual effects work created here by Weta is pretty remarkable. Alita is an often startling visual creation, demonstrating another leap forward in terms of photorealism and motion capture technology. However, despite the considerable bells-and-whistles, you could easily imagine the film having fallen out of a time warp from the 90s. ‘Alita’ is a crazy mix of sticky dialogue, messy plotting, unashamed sentimentality, and way too many ideas. There’s so much going on that its two-hour running time feels overstuffed and rushed, but a lucky consequence is that it never feels dull. The ideas are just crazy enough to kind of work, the sentiment is sincere, and the dialogue at least never tries to be clever. It also helps that Alita is a genuinely engaging character, and that Salazar’s natural empathy and charm can overcome the dialogue and shine through the CGI. The world is also well-executed, even if it looks a little too much like LA in the 90s.

Another fascinating aspect of ‘Alita’ is the stylistic combination of Cameron and Rodriguez. The latter has always been an idiosyncratic director with a very distinct texture, but here he tries to stick much closer to the style of the former. It mostly works, but while Rodriguez does a fine job, he can’t overcome the weaknesses of the screenplay the way Cameron is able to. Writing has never been Cameron’s strong point, but his incredible skill as a director has always made up for that. Rodriguez just isn’t inventive or daring enough here to do that, acting more like a cover band than an original artist, though flashes of his love of the violent do peek through. At least it’s a solid cover though, and he handles both the CGI and the performances well. Salazar is the standout, but there’s also some solid work from Waltz, Jennifer Connelly and Mahershala Ali, with the appropriately handsome Keean Johnson as Alita’s human love interest Hugo. Wisely, he’s very much a supporting character, the film never losing sight amongst all its sci-fi mumbo jumbo that this is a story of a young woman finding her identity and strength, beginning with optimism, having that optimism shattered and then fighting to make it a reality again. In that sense, Alita is very much a James Cameron character, another powerful female protagonist who arrives at the finale with her head held high from her own well of strength.

As much as it isn’t the most memorable film, it’s a pity that we may not see any more of ‘Alita: Battle Angel’. If this had been released in the 90s it would have killed with audiences, but as much as we’re thirsting for nostalgia from the 80s and 90s, audiences now only want suggestions or imitations of them, recognisable iconography or intellectual properties, not new ideas fashioned from a similar cloth. I’m sure ‘Alita: Battle Angel’ will gain a kind of cult following in the years to come, and it probably deserves to. At the very least, it’s a really solid piece of popcorn entertainment with a great female character at the centre.

The ideas are just crazy enough to kind of work, the sentiment is sincere and the dialogue at least never tries to be clever.

PICTURE & SOUND
It’s taken an unusually long time for ‘Alita’ to make it to home entertainment, and one suspects that may be to make sure that the release stands up to Cameron and Rodriguez’s standards. The 2160p 2.39:1 transfer on the 4K UHD really is top-notch, beautifully clear and rich with detail. It’s not clear what the resolution of the Digital Intermediate was, but there doesn’t appear to be any compromise in the image. Colour is enhanced with HDR 10+, the colour carefully balanced to bounce from the screen but never overwhelm. The 4K UHD disc also comes with a robust Dolby Atmos/TrueHD 7.1 track, beautifully balanced and dynamic. I suspect this will become a bit of a demo track for home theatres.

As an indication of their commitment to 3D, the 4K UHD set not only comes with a 1080p Blu-ray but a 3D version of the film. Unfortunately, I don’t have the set-up to check this disc out, but I suspect it’ll be excellent. For the most complete package of ‘Alita’, JB Hi-Fi has an exclusive Steelbook edition that not only includes the 4K UHD, 3D and Blu-ray discs, but a second disc of extras. Needless to say, a lot of thought has gone into this release.

SPECIAL FEATURES
All extras are to be found on the 1080p Blu-ray disc found in the set. They include:
- 'Alita’s World', a series of animated shorts on the wider Alita universe, including 'The Fall' (5:05), 'Iron City' (3:19), 'What It Means To Be A Cyborg' (2:28) and 'Rules of the Game' (2:52) - ‘From Manga to Screen’ (20:47), a look at the long journey of ‘Alita’ through development to production
- ‘Evolution of Alita’ (19:43), showing the development of the look and character of Alita
- ‘Motorball’ (6:02), which focuses on the futuristic sport integral to the plot of the film
- London Screenng Q&A (26:38) with the main cast and crew
- ’10 Minute Cooking School: Chocolate’ (5:28), one of Rodriguez’s home video traditions where the director takes you through a cooking class
- '2005 Art Compilation (14:20), Cameron’s original visual pitch for the film, featuring heaps of conceptual artwork along with narration

There’s also a Scene Deconstruction feature where you can watch four scenes from the filming move between the on-set footage, the animation stage and the final result. It’s a really great demonstration of the steps involved in bringing Alita to life and offering a glimpse at Salazar’s even more arresting on-set performance.

All of the material is well-crafted if lacking in rigour, but there’s so much enthusiasm from the cast and crew. They also include interviews with Yukito Kishiro where he talks about the creation of Alita and his relationship with Cameron and Rodriguez, and the two filmmakers go into great detail about their insistence on making the film as close to the manga as possible. 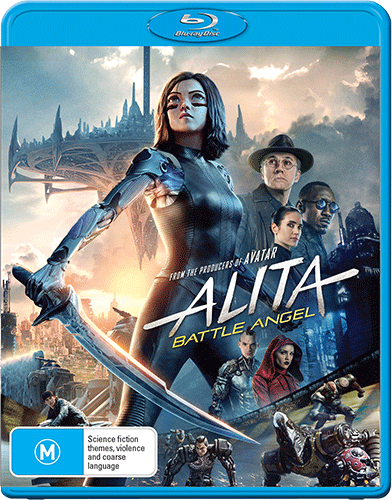 Like our page on Facebook, follow us on Twitter or Instagram, or become a member on SWITCH.
Complete your details below. Members can sign insign in at the top of this page to have their details automatically filled in.
Please ensure the fields marked in red are completed.
Become a member - so I don't have to fill in my details every time
Competition opens at 5:00pm AEST on Sunday 21st July 2019 and closes at 11:59 pm AEST on Sunday 28th July 2019. Five winners will be chosen at random on Monday 29th July 2019. To successfully win, entrants must fulfil the above entry conditions before the time the competition closes. Current members/followers are eligible to enter the competition. Only one entry per person. Only one winner per household. To be a valid winner, the entrant must not have won a prize from SWITCH within the last 28 days. Each winner will receive one . By entering, you agree to receive occasional emails from SWITCH in the future. If you decide to unsubscribe from these updates, any further entries will not be applicable. Only Australian residents are eligible to enter.
FAST FACTS
RELEASE DATE: 24/07/2019
RUN TIME: 02h 02m
SCORE: Tom Holkenborg
www.AlitaBattleAngel.com
AlitaMovie
AlitaMovie
AlitaMovie