In Melbourne in 1953, five year old Robert (Daniel Berini) and newborn Angela (Antoniette Iesue) are promised in marriage by their fathers, Sal (Paul Mercurio) and Joe (Mirko Grillini). Against the misgivings of Angela’s mother (Tina Arena), Sal is insistent that he must uphold his promise to Joe – a connected man.

Fast forward to 1974, and Angela is now a beautiful, intelligent and modern lady whose aspirations lie well beyond the family pastry shop. Robert, now 25, has just returned home from studying law abroad at Oxford. Despite changing times, fading traditions and Angela’s love for another man, she is still expected to marry Robert. As a web of secrets, lies and revelations surface, it teaches everyone involved that love, like life, can never be perfectly arranged. 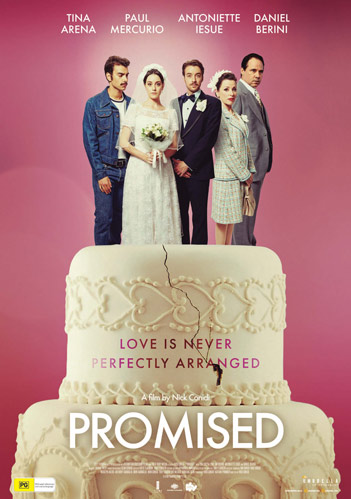 The 'Promised' competition has now closed. Winners will be announced shortly. Check our Comps page for all a list of our winners.

Competition opens at 5pm AEDT on Sunday 20th October 2019 and closes at 11:59pm AEDT on Sunday 27th October 2019. Five winners will be chosen at random on Monday 28th October 2019. To successfully win, entrants must fulfil the above entry conditions before the time the competition closes. Current members/followers are eligible to enter the competition. Only one entry per person. Only one winner per household. To be a valid winner, the entrant must not have won a prize from SWITCH within the last 28 days. Each winner will receive one double pass to 'Promised'. By entering, you agree to receive occasional emails from SWITCH in the future. If you decide to unsubscribe from these updates, any further entries will not be applicable. Only Australian residents are eligible to enter.

'Promised' is in cinemas from Thursday the 24th October 2019 through Umbrella Entertainment.