As Lucy Hutton (Lucy Hale, 'Fantasy Island') theorises in the opening scene of the new romantic comedy 'The Hating Game,' there's an extremely fine line between love and hate. Unintentionally, this serves as a prophecy for the film's following 102 minutes; sure, 'The Hating Game' is charming enough, but there's just as much chance the audience will walk out swooning as there is that they will want a refund for their wasted time.

Based on the best-selling novel of the same name by Sally Thorne, 'The Hating Game' chronicles the will-they-or-won't-they corporate rivalry between Lucy and Joshua Templeton (Austin Stowell, Hale's 'Fantasy Island' co-star) as the result of a merger between the publishing companies Lucy and Joshua work at. With their desks facing each other to facilitate constant sexually-charged staring contests (surely, if they dislike each other so much, install a screen? Or rotate a desk?), Lucy insists Joshua is the worst because of... how highly strung and condescending he is? Miraculously, the film quickly gives Lucy and Joshua a real reason to dislike each other, as a workplace promotion they both want gives way to a game of extremely unprofessional one-upmanship. Of course, it's not long before those staring contests give way to feelings neither Lucy nor Josh can deny.

The lifeblood of the enemies-to-lovers trope is the slow burn, the tantalising waiting that goes hand-in-hand with the hating. Unfortunately, that wait is virtually non-existent in 'The Hating Game', with Lucy and Joshua kissing in the first act of the film. Lucy insists she maintain a mature, moral demeanour at work, but much of her rivalry with Josh seems incredibly unfounded and petty, and we (perhaps thankfully) see almost none of it before they are all over each other in an elevator. Chalk it up to wanting to get to the source material's steamier content, or not thinking audiences can suspend their disbelief that these two incredibly hot people won't end up together, but rushing the most exciting element of the film means that 'The Hating Game' quickly falls down predictable rom-com trapdoors. With the exception of the 'After' trilogy, this just might be the most cyclical rom-com I've ever seen. A minor, contrived misunderstanding will lead to Lucy and Josh insisting they are better off as enemies, only for them to reunite over a perfectly-timed pop song cover.

The enemies-to-lovers slow burn is virtually non-existent in 'The Hating Game'...

The novel on which the film is based has been praised for its witty, clever narration, but from this adaptation, you'd never guess it. Despite this, it's hard to be entirely turned off by 'The Hating Game,' the genius casting of its leads pulling through where its script lets the film down. Hale and Stowell and charming enough on their own, but their chemistry - even in the face of eye-rolling plot predictability - is electric. Hollywood hasn't been kind to Lucy Hale; after a string of successful television roles, her transition to film star of the same calibre has handed her consistently disappointing projects. 'The Hating Game' is as close as Hale has gotten to a name-making role, namely because not only does her character in the film feel like an amalgamation of many of her smaller-screen roles, but 'The Hating Game' is as light as a season of a television soap. Perhaps if Hale pursues cheesier roles like this, sticking to her wheelhouse will eventually pay big dividends.

Rom-com fans will find just enough in 'The Hating Game' to make it an enjoyable experience, but don't expect a 'Set It Up'-style masterclass in a workplace romance. It's a film that has just as much to love as there is to hate; a perfect summation of its own subject matter. 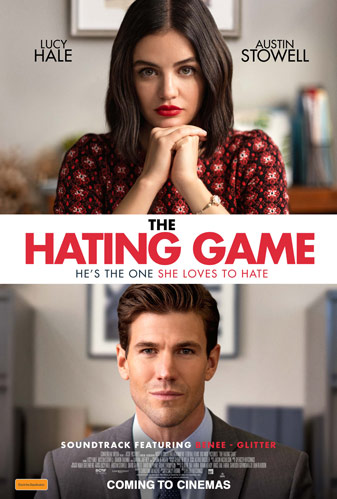 To celebrate the release of 'The Hating Game' in cinemas, we're giving you the chance to win a double pass.

To win one of six double passes, just make sure you follow both steps:

Like our page on Facebook, follow us on Twitter or Instagram, or become a member on SWITCH.
Complete your details below. Members can sign insign in at the top of this page to have their details automatically filled in.
Please ensure the fields marked in red are completed.
Become a member - so I don't have to fill in my details every time
Competition opens at 5:00pm AEDT on Sunday 23rd January 2022 and closes at 11:59 pm AEDT on Sunday 30th January 2022. Six winners will be chosen at random on Monday 31st January 2022. To successfully win, entrants must fulfil the above entry conditions before the time the competition closes. Current members/followers are eligible to enter the competition. Only one entry per person. Only one winner per household. To be a valid winner, the entrant must not have won a prize from SWITCH within the last 28 days. Each winner will receive one double pass to 'The Hating Game'. By entering, you agree to receive occasional emails from SWITCH in the future. If you decide to unsubscribe from these updates, any further entries will not be applicable. Only Australian residents are eligible to enter.
FAST FACTS
RELEASE DATE: TBA
RUN TIME: 01h 42m
mistersmithent.com/film/the-hating-game
HatingGameMovie
HatingGameMovie
HatingGameMovie

RELATEDAFTER WE COLLIDEDWattpad returns to the screen for slightly better, still dumb, results

RELATEDAFTERFrom Wattpad to the big screen - and God knows why

RELATEDFIFTY SHADES FREEDOne last O - as in OMG this is bad