Share the love (not the virus!) with our favourite romantic films streaming right now. The SWITCH team have put their hearts on their sleeves and declared their top rom-coms, so grab a box of tissues and a block of chocolate and curl up on the couch! 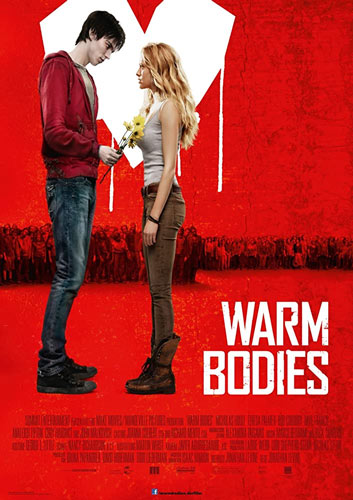 It doesn't get more romantic than Romeo and Juliet... even if Romeo and Juliet were zombies... well, if just Romeo was a zombie, Juliet was a human, and Juliet's father and, you know, society and a general sense of safety forbid them from becoming a thing. Put it all together and you get this tasty rom-com 'Warm Bodies'. It's creepy, it's kooky, it's altogether beautiful and surprising. Seven years ago, this little nugget sadly flew under the radar and far too many peeps missed out on the quirky and delightful musings of a zombie trying to find his place in the world when boom! cue 'Missing You' by John Waite, he spots Julie fighting off a zombie horde and it's love at first bite. As it turns out, zombies need more than just brains, they also need to be loved. 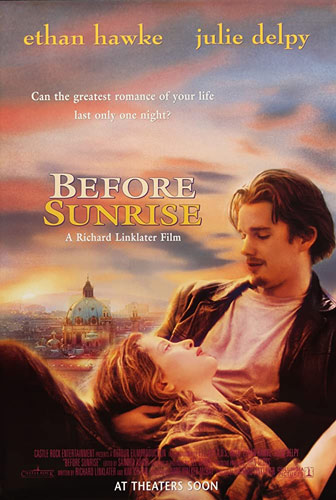 I'm technically cheating since this is a recommendation for the entire 'Before' Trilogy, but it's among the most insightful and emotional six hours you'll ever spend with two fictional characters. 'Sunrise', the first instalment in director Richard Linklater's trilogy, sees 23-year-old Céline (Julie Delpy, 'Wiener-Dog') meet Jesse (Ethan Hawke, 'First Reformed') on a train from Budapest. She is returning to her hometown of Paris; he is returning home to the United States. Together, the two decide to disembark in Vienna, spending the rest of the day exploring the city - and each other's lives, fears and emotions - inevitably falling for each other in the process. The film is almost exclusively comprised of conversations between Céline and Jesse, the freedom both feel in opening up to one another fuelled by the belief that they may not see each other ever again. Simply put, no other romance film or film series has spoken to my own anxieties and reservations about romantic connections quite like 'Before Sunrise' does. Come for the incredible chemistry between the two leads, without whom the film could simply not exist, and stay for the gripping meditations on love, self-discovery and longing for a self-fulfilling connection - and don't be surprised when you find yourself seeking out the equally stunning sequels 'Before Sunset' and 'Before Midnight'. A twentysomething man, Evan (Lou Taylor Pucci, 'Evil Dead'), loses his mother to cancer, punches a dude's gold grill from his mouth and gets fired from his bartending gig. Taking the advice of his friend Tommy (Jeremy Gardner), Evan buys a ticket to a random location and flies from Southern California to Italy to sort his shit out. At a picturesque bar on the coastline, he meets Louise (Nadia Hilker), a young woman living in a small town nearby. The two share some chemistry. But she has her own shit to sort out too. Justin Benson and Aaron Moorhead's 'Spring' is a walk-and-talk romance reminiscent of Richard Linklater's 'Before' trilogy: grieving American bro meets striking European woman while on a trip to escape his troubles, and they quickly form a deep attachment. It's a love story focused on the challenges of overcoming our past when building a new relationship. But 'Spring' is also a Cronenbergian horror movie, as the evolutionary attraction of eternal life in this world (and the lengths to which one might go to achieve it) is pitted against the temporary nature of mortal love. Personally, I think 'Spring' is what cinema is about: it exists in a gorgeous, hazy, dreamlike reality, contrasting the beautiful and disturbing, and capturing humanity at a basic level. The scenery (it was shot in Polignano a Mare in Apulia), naturalistic dialogue, believable characters, intelligence, humour and humanity make it a minor classic. I'm a huge sucker for a good romantic comedy, and this one is super. Tim (Domhnall Gleeson) learns from his father (Bill Nighy) that when the men in their family turn 21, they can time travel. Oh yeah, there's time travel. But don't let that dissuade you, and definitely don't focus on it, because it's not what makes this feature special. Tim uses this tool to fall in love with Mary (Rachel McAdams), the woman of his dreams, by constantly revisiting and refining their time spent together. Writer/director Richard Curtis is back in form to share this tale about love, loss, happiness, and ultimately to explore the relationship between father and son. 'About Time' is a melancholic trip with extremely likeable characters, beautiful settings, and a bittersweet emotional core. It's easy to tear this film apart and point out all it's flaws, and there are plenty, but you don't sit through a Richard Curtis film if you're going to be like that. Despite all its imperfections, there is so much to love about this film, that I guarantee it will leave you feeling like you've been hugged by a big, warm, fuzzy heartbeat. For me, the mark of a great romantic film is if it makes you think about your loved ones, and 'About Time' certainly does. This underappreciated gem is both a romantic fantasy as well as something much more sinister. Calvin (Paul Dano) is a successful novelist who's struggling to find that creative spark for his next book. However, when he starts to write about the girl of his dreams (Zoe Kazan), she somehow becomes reality. Of course, that's when everything starts going very, very wrong. Don't let the film's fantasy element put you off - it's simply a technique to explore the way we try to manipulate and control the people that we experience relationships with. Featuring a terrific indie cast (which also includes Annette Bening, Chris Messina, Antonio Banderas and Steve Coogan) and a unique concept and witty writing from Kazan, this is no straightforward rom-com - but it will surprise you how touching and truthful it is. If the line "fresh creamery butter" does nothing for you, I think it's time you experienced the magic that is 'Kate & Leopold'. Rom-com veteran Meg Ryan is your typical modern-day executive when her time-traveling ex physicist Stuart (Leiv Schreiber) accidentally brings back His Grace Leopold Alexis Eijah Walker Thomas Gareth Mountbatten, 3rd Duke of Albany from the 1800s, played by the man everyone wants to be with: Hugh Jackman. It's just one of those early 2000s cliché-filled rom-coms, but with a wild time-traveling plot, it works so well and gives you the perfect fun escape you need in this time. It's the ultimate film to have a glass of wine with and enjoy the cheesiness. Enjoy Meg Ryan at her most Meg Ryan, enjoy the only film with Jackman and Schreiber (they never did anything together, don't worry about that), and of course sex icon to the mums, the gays and the superhero fanboys Hugh Jackman. 'Pride and Prejudice' - the 2005 Keira Knightley edition with the other guy... the one who surprisingly becomes more endearing and hotter towards the end of the film) - is one film everybody should watch and learn from in their lifetime. This film is a top-notch adaption of Jane Austen's classic, with a fantastic cast, outstanding cinematography, perfect score and awesome message. This film has stuck by me since I was a wee cherub. It proved meaningless back then, as I didn't understand a word - but I suppose that only accentuates how pretty it is to look at. Since then, it's been a great testament to my teachings of love, life and judgement. It might even cause you to look back at past (or present) experiences of love and realise you were being a bit of an Elizabeth? Mr Darcy? Or maybe even a Jane? That's perhaps the greatest thing about this (proven) timeless classic: its ability to be applicable to our own romantic narratives, or lack of.

Few films often do justice to their novel counterparts, but this film really does try and do all characters and their respective arcs justice. Go enjoy Elizabeth Bennett (not to be confused with Elizabeth Swan) dropping some zingers, Judi Dench playing a character you won't like, Matthew Macfadyen charming your socks off - and realise (while feeling a little relieved too) that love has always been a bit complicated. 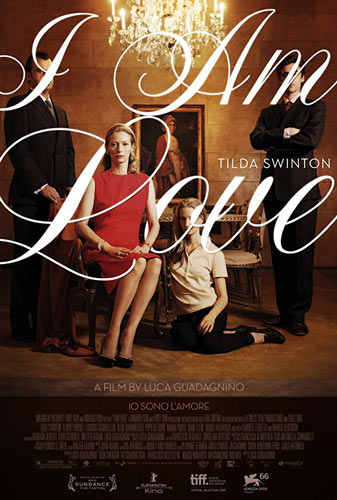 If romance is as much an aesthetic as it is a state of being, then nowhere is it more sumptuously realised that Luca Guadagnino's 'I Am Love', the story of intelligent but unfulfilled Emma (Tilda Swinton), married into a wealthy Italian family, and her passionate love affair with young chef Antonio (Edoardo Gabbriellini). The aesthetic excess of this film is preposterous, but only a filmmaker like Guadagnino could justify its excess and weave it into a heady, exhilarating opera of the senses. It oozes longing and sensuality in every frame, with far more histrionic abandon than 'Call Me By Your Name' and more vice-like aesthetic control than 'A Bigger Splash' or 'Suspiria'. This is the kind of film that leaves you giddy and exhausted, two hours where every sense has been aroused and satisfied. It's as if romance itself has been made manifest, and we get the joy of devouring every last morsel of it. 'Crazy Rich Asians' has all the tropes that make a rom-com a rom-com; it's such an enjoyable watch. Not only do we root for the girl to get the guy, but the supporting cast are so quirky and funny that it's impossible not to have a good time. Did I mention Akwafina is in it?

'Crazy Rich Asians' is also a fantastic rom-com for another possibly more important reason: the cast is almost entirely made up of Asian actors but in a very Western-style movie, such representation from Hollywood is something to be cherished and applauded. When coupled with the superb script and brilliant performances, it just goes to show that representation doesn't kill a film and that anyone can have a place in a story. You'll laugh, you might cry, but by the end of it you'll be glad you went along for the ride.