As all of mankind comes together across the world, enduring the same situation we do, the SWITCH team wanted to celebrate some of the best cinema from across the globe. We've collected our top foreign films streaming right now, so take a trip around the planet from the safety of your living room! Studio Ghibli is an animation studio from Japan and their catalogue is now available on Netflix, and I would recommend all of them. However, gun to my head and I had to pick one, it has to be Hayao Miyazaki's 'The Wind Rises'. His most recent film to date is also his most geared towards a Western audience, so if you haven't come across anything in his filmography before, this would be an excellent start. Somewhat based on a true story (with added Miyazaki artistic license), 'The Wind Rises' follows the story of Jiro Horikoshi, a Japanese flight engineer who had a major hand in creating the Japanese warplanes for the Second World War. This film chooses not to commend what these planes were used for, but rather frames the contrast of Jiro's dream with their eventual use as a beautiful tragedy, and so this film proves to be. Jiro was ultimately an artist who chased his dream, creating for the sake of beauty, not the inevitable destruction caused by his masterpiece. Miyazaki doesn't shy away from the pitfalls of war, but chooses to focus instead on the passion and romance, a paradox which proves complex in its nature. There are so many beautiful aspects to this film, from the score to the colourful landscapes, stunning dream sequences, and of course the use of human mouths as the sound effects - it all plays a role in shaping this film as a beautiful tragedy. It also contains maybe the most romantic scene I have seen in a very long time, which is a great added bonus. Everyone has their favourite Miyazaki, and this one is mine. 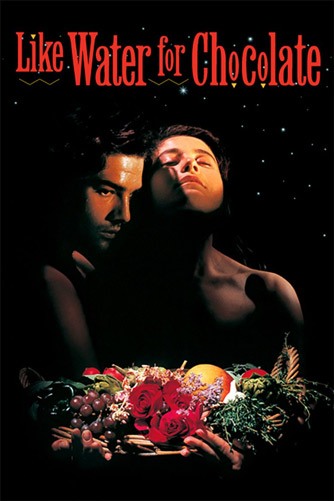 Set in turn-of-the-century Mexico against the backdrop of the revolution, Alfonso Arau's 'Like Water For Chocolate' (adapted from author/ex-wife Laura Esquivel's novel) concentrates on what was going on at home while the guns roared in the distance. Tita (Lumi Cavazos), the youngest of three daughters, is forbidden to wed because family tradition dictates that she must look after her mother, a nasty hag who bullies her unfortunate offspring whilst alive and continues to haunt her after she has kicked the bucket. Tita's true love Pedro (Marco Leonardi, 'All the Money in the World') marries her sister Rosaura (Yareli Arizmedi) in order to remain close at hand. Tita, apparently developing a mystic bond with her recipes, carries on her relationship through food and punishes those who wrong her with magical meals, liable to induce anything from farting to horniness. 'Like Water For Chocolate' is a melodrama with sensuous, golden-brown cinematography and leanings towards magic realism, covering 40 years of love and gradual empowerment at mealtimes. The title refers to a Mexican expression "como agua para chocolate" describing the correct water temperature for (hot) chocolate; a simile for either passion or anger - or both. This film contains scenes of large gatherings of people eating delicious food together and food-fuelled erotic moments, two things everyone could use a lot more of during coronavirus lockdown. This film with fuck. You. Up. I could go on and on about what an incredibly powerful film this is; that Mads Mikkelsen is one of the greatest working actors today and how visceral a filmmaker Thomas Vinterberg is. But it's common practice among those that have actually seen 'The Hunt' to compare stories of just how fucked up they were after watching this masterful film. Strange, I know. But it just goes to show how powerful a viewing experience you're in for here. There's no baby murder or addicts shooting up in to their eyeballs, extreme violence, gratuitous sex or animal slaughter; this is simply a story about people and how one comment can change who they are on a fundamental level for better and for worse. This film will fuck. You. Up. Don't say I didn't warn you - and don't say I don't tell you that this is an absolute must-see. Bollywood is a very interest sector of the film world - it's a whole different way of filmmaking that most people don't even know about. Now that you have some time to kill, it might be worth dipping your toe into the Bollywood pool - and yes, they are all over three hours long, but you now have some time on your hands. 'Happy New Year' is kind of the perfect cliché Bollywood movie: big stars, big action and, of course, huge musical numbers. To pull off a heist a hotel a team must take part in a... dance competition. This film is just a delightful blast from start to finish and the musical numbers are so enjoyable and so colourful you're sure to just have so much fun with this one. This little gem from Brazilian director Gabriel Mascaro slipped through the cracks for Australian audiences, so now is a great opportunity to discover it. Iremar (Juliano Cazarré) works in the Vaquejadas, a form of rodeo in North East Brazil, tending to the bulls. His life is in the back of the truck they use to transport them along with the self-made family of his co-workers. In his time off though, Iremar fosters his ambitions to be a fashion designer, using the limited resources at his disposal to hone his craft. It's a wonderful idea, and 'Neon Bull' is a wonderful film - a magical film that paints an unusually tender portrait of masculinity through a sensory and sensual lens. This one has really stayed with me in the years since I saw it, and its inclusion on Stan is a great opportunity for it to reach a wider audience.

'A GIRL WALKS HOME AT NIGHT' If you're bored in isolation and looking for an out-there cinematic experience, look no further than this black-and-white vampire Western film (yes, you read that right). Known simply as The Girl (Sheila Vand, 'Argo'), a young vampire with a love for skateboarding protects who terrorises the residents of her Iranian hometown, including pimp Saeed (Dominic Rains, TV's 'Chicago Med') and Arash (Arash Marandi, 'Fireflies'), to whom The Girl finds herself drawn to. Boasting an excellent lead performance and a killer soundtrack, 'A Girl Walks Home Alone at Night' is a moving and visually striking entry into the noir cinematic canon. We need more films like this. 'Life is Beautiful', directed and co-written by Roberto Benigni, is the essence of why filmmaking exists. To pass down stories. What makes the film more beautiful than it already is is reading the backstory to the true events it was grounded in. The film follows Guido Orefice (Benigni) and his son as they are taken to a Nazi death camp. Fearing that his son would see the worst of humanity and be scared (naturally) of the circumstances, Guido uses humour and games to shield his son from the terrors of what is happening. This took home the 1999 Oscar for Best Foreign Film - and it deserved it! This Italian masterpiece will show you the power behind great relationships and a child's naïvety. What's more, watching Benigni's Oscar speech is the cherry on top that follows. This is a masterpiece of a film with a man who deserved all the praise he got. Not to be confused with the shark horror 'Deep Blue Sea', 'Dark Blue World' is set begins pre-World War II in Czechoslovakia. As Nazi troops take over the country, two top pilots, Franta (Ondrej Vetchý) and Karel (Krystof Hádek), escape to Britain to join the RAF, but their friendship is put to the test when they both men fall for the same woman (Tara Fitzgerald). A great amalgamation of war, action, drama and romance, its similarities to 'Pearl Harbor' can be forgiven for its excellent aerial scenes and eye-opening historical revelation: that many of these heroic pilots were branded as traitors once communists took power in Czechoslovakia. 'Dark Blue World' is a war film with a little something for everyone. 'Pan's Labyrinth' is one of those films that I can say safely cemented my love of cinema - and further to that, foreign language cinema. I was around 15 or 16 at the time of its release and remember seeing it in a cinema and being completely transported. Guillermo del Toro is a modern fairytale master, and this film is no exception to the rule. The artistry and design accompanied with a riveting plot and the highest stakes imaginable (the fall of fascism in Spain) combine to create one of the most intricate and beautiful films. Not to mention the incredible lead performance by Ivana Baquero, who delivered one of the greatest child actor performances ever. Let yourself get swept up in the magic and horror that is 'Pan's Labyrinth'.