It's the perfect time to spend some quality time with your family - so settle in with these movies that are sure to entertain the young and the young at heart!

'THE ADVENTURES OF TINTIN' 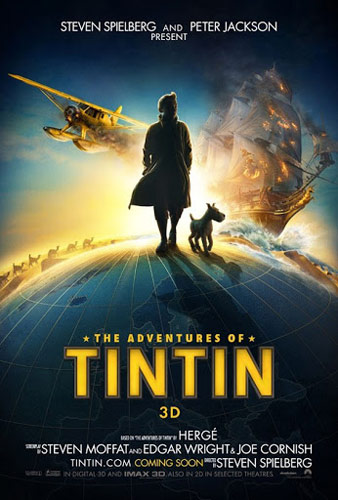 This film is an absolute riot - it's fun for the whole family, has an action-packed story, and is visually stunning. As Tintin (Jamie Bell) and Captain Haddock (Andy Serkis) set off on and adventure around the world, we join them in some of the most jaw-dropping animation sequeneces ever committed to film - the pinnacle being the two-and-a-half minute mise en scène chase at the film's big finale in Morocco. Even though it's an epic action adventure, it's also lathered in comedy - both with its visual humour and extremely clever wit. With this amount of love and detail being poured into the movie from director Steven Spielberg, producer Peter Jackson and writers Steven Moffat, Edgar Wright and Joe Cornish, this is a guaranteed hit that the whole family will cherish. Because there are no new ideas anymore, this 1990 classic based on the 1983 Roald Dahl book has a 21st century remake in the works starring Anne Hathaway and directed by Robert Zemeckis. So, okay, they're not the worse people in the world, but as a purist I'm insisting you introduce your kids to this incredible film before CGI and a lack of heart and originality destroy it. Please note this may not be for the tiniest members of the family. Yes, it's a children's film, but the witches can be scary for some... but it's only for one scene. This movie shouldn't work - a movie about Goofy that's also a spin-off his TV show 'Goof Troop' which is incredibly 90s - and yet somehow 'A Goofy Movie' is one of Disney's most heartwarming films. Goofy's son, Max, is breaking for summer vacation. He wants to see Powerline, a Michael Jackson-like popstar, to impress Roxanne, but after Max gets in trouble at school, Goofy decides to go on a father-son fishing trip. Max does everything in his power to avoid spending time with his Dad, while Goofy only wants to get closer. Though the movie serves up some classic road trip hijinks, what stuck with me as kid is the love that Goofy has for his son; who would have thought Goofy could make you cry? Of course, the music is incredibly catchy - yes, the musical numbers but more so Powerline's music. His 'I 2 I' song has become something of a personal motto of mine: "If we listen to each other's heart, we'll find we're never too far apart,' something I think we all need to reminded of. Even if you've seen this movie so much you wore out the VHS (can't speak from experience, of course), sit down and re-watch it - it surprises you how well it works and how well it holds up. It's truly the perfect catch.

'THE PRINCE OF EGYPT' In the leadup to Passover, my family would always sit down to watch 'The Prince of Egypt'. At first, I appreciated it on face value, but over the years, I started to realise that this is nothing short of a masterpiece. Often overlooked on all the "Best Animation" lists, this DreamWorks-produced film is artistically, musically and thematically on another level. The grand scale, the visual depth, the cast; all aided by Schwartz and Zimmer bringing ancient Egypt to life, with an opening number to rival even 'Les Miserables'' 'Work Song'. It's not about belief in a higher power, but rather focusses on its characters in a struggle about destiny, and self-belief. If you've seen this movie before and simply dismissed it, I beg you to give it another chance. It delivers (pardon the pun) on all counts, and teaches us that there are little miracles every day, something we need now as a society more than ever. No one expected Paul King's 'Paddington' to be as great as it was. Michael Bond's iconic marmalade-loving bear from darkest Peru, living with the whimsical Brown family in London, could have gone the way of 'Peter Rabbit' and been snide, disposable rubbish, but King created something genuine and heartfelt and funny and wholesome, a children's classic for the ages. The last thing anyone expected though was that his follow-up, 'Paddington 2', would be one of the truly great films of this century, a sequel that takes everything wonderful about its predecessor and elevates it to the heavens. I'm serious - 'Paddington 2' is a masterpiece. It should have been nominated for Oscars Best Picture. It might be the greatest sequel ever made. Both films are available on Netflix, so do the right thing in these uncertain and scary times: sit the family down and marathon both of them. Let the most kind-hearted character in modern literature hand you some marmalade, give you a smile and tell you that everything is going to be okay.

'HOW TO TRAIN YOUR DRAGON' It's hard to make a family film that appeals to the entire family, but 'How To Train Your Dragon' is the rare exception. The story of the forbidden friendship between a young boy named Hiccup (Jay Baruchel, 'This Is The End') and one of the most dangerous dragons in the land, affectionately re-named Toothless, is by far Dreamworks' finest animated film, launching a stunningly animated trilogy that has grown with its fans and has left me heartwarmed and teary eyed even as an adult. 'Secondhand Lions' is, in my opinion, a hidden gem. I've only come across few people who know the film, and all boast of its enduring message, warmth and values as a movie. This film is the tale of one young Walter (Haley Joel Osment) and how he finds himself living a summer with his two great uncles, Hub (Robert Duvall) and Garth (Michael Caine). The two old men happen to have millions of dollars.. but no one knows how they got it, or where? The film is an exploration of storytelling, intergenerational relationships, legacy, honesty and belief. It's a story of growing up as who we want to be, as opposed to others telling us who we should be. Most of all, it's a movie about strength - of character, of youth and of true love. Timeless and weird, 'Labyrinth' stars Jennifer Connelly as Sarah, a confused teenager who wishes to stay a young and imaginative child, confronting Jareth The Goblin King (portrayed by a massively glammed-up David Bowie) after accidentally sending her baby brother, Toby, into his clutches. Written by Monty Python alum Terry Jones, produced by George Lucas, and directed by Jim Henson, the film had a host of talents behind and in front of the camera. For kids, the film has legions of fun fantasy creatures, brought to life by some of the most complicated puppetry work The Jim Henson Company had done to that point. For teens and adults, the film is essentially about a young woman's passage into a different aspect of her life, and the sexual imagery (i.e. David Bowie's crotch) is pretty pronounced. I am inordinately fond of this film. Not your average superhero movie, and definitely something the whole family can enjoy. It's got everything a good family film should have - laughs, a little romance, and a fair amount of action... the ultimate superhero fantasy come to life. It would be amiss of me if I didn't tell you that I also cried at one point. Yep, isolation got me good!

TRENDINGTHE MAN WHO FEELS NO PAIN